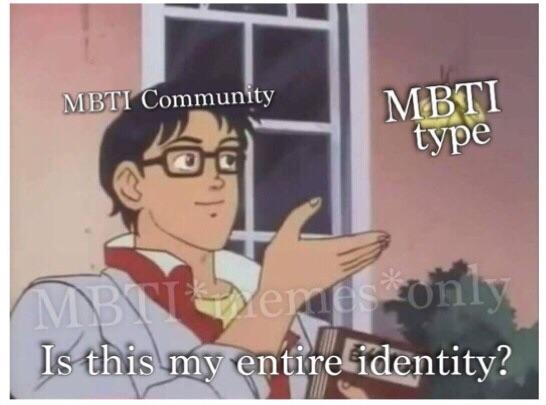 Long ago, I dated a woman who believed in ghosts and crystals and horoscopes and toxins and stuff. Of course crystals exist, but she claimed that they heal you and incur luck and other mumbo-jumbo that I couldn’t wrap my head around.

But I’m not here to Destroy Magic with Facts & Logic — I’m here to preach against assholes like me who suck the fun out of everything.

I like the Myers-Briggs (MBTI) personality test. Of course, I know it’s fake news. But that doesn’t stop me from enjoying shitposts on r/entp.

Even though MBTI isn’t true, it’s pretty useful. MBTI is a consistent structure which people can use to talk about how they view themselves. Plus, it’s fun to take personality tests 💁

But if it’s okay to suspend your disbelief for harmless fantasies like MBTI, then is it okay to do the same for crystal-healing or flat-earth or Catholicism? I don’t know. I’m still trying to figure out how much Facts & Logic actually matter.

Horoscopes and anti-vaxx are of the same kind but not the same degree. Belief in “Today May be a Good Day for Capricorns” is benign. But belief that “Today May Be a Measles Day for My Children” is potentially fatal to you and the people around you.

Should we tolerate bad ideas?

My friend (let’s call her K) recently became a grandmother (congrats!). K’s daughter and son-in-law are both medical professionals, so they obviously wanted to vaccinate their beautiful baby boy. K called me, sobbing and lamenting about the dangers of vaccines. Now, I could’ve thrown Facts & Logic at her, but what are the chances she would’ve listened? That day I tried a different approach — what was she really saying? Rather than discussing medical literature and statistics, we talked about feelings. And well, it was fear — a lot of fear. And other things. Because humans are complicated. And ya know what? I don’t think she’s clinging to anti-vaxx so dearly anymore, because it was never about the vaccines.

I’m not going to opine about abortion, but realize that half of the U.S. population literally believes children are being murdered en-masse. Try to place yourself in their shoes — what if it was common practice to kill children under the age of 5 or 10? Would you be alright with that?

Many of my friends and family are Evangelicals. I don’t believe in God, but it’s useful to simulate their beliefs. These people literally believe that a vampire crucified himself to conquer evil. Throwing Facts & Logic at them is just going to make me seem unreliable and combatitive. When advising others, guide them with words that they understand; use their mental frameworks to tackle problems.

Their feelings don’t care about your facts.

Simulate others’ beliefs. Listen to what others are saying. Don’t weaponize your Facts & Logic until you’ve heard what their hearts are saying.

Ugh, my conclusions here are unsatisfying: err on the side of “Be a Good Listener”. But the world would be a better place if everybody respected Facts & Logic. But I guess everybody tries their best.

But once again, I’m not here to Destroy Magic with Facts & Logic.

Vaccinations, horoscopes, and religion are easy targets. But I believe in a bunch of fringe stuff too! I believe Dvorak Keyboards are Superior and The Internet is Broken and Nuclear Energy is Wonderful and Constructivist Maths are Cool and Capitalism is Cool Sometimes and also Universal Basic Income is Cool Too and Licensure is Evil and Taoism is Worthwhile and Cryptocurrency and Oxford Commas are Correct and so on.

And I’m always so sure.

I mean, I’ve obviously researched these things, but I’m not an expert. I’m currently 26. I don’t know anything about anything.

But I care. Maybe I shouldn’t care. I don’t know.

I’m not sure if I really even have a point here. I’m definitely not saying anything new:

Back to my ex-girlfriend’s crystal collection.

One day, long ago, I went over to her place feeling like a turd. I was exhausted and anxious and everything was rotten. As I was lying on the couch, she traced some spooky patterns on my body and balanced crystals on me.

And it felt nice.